I went with my kids and had a blast! 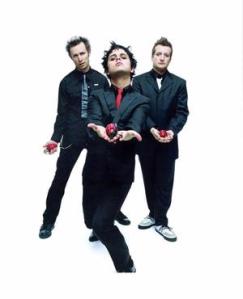 Amazingly, Green Day kick off pretty much on time and choose ‘Song of the Century’ and ’21st Century Breakdown’ as their openers. It felt good to be in their presence: even if that presence was the length of a football pitch away. I really wanted to enjoy this gig. I’ve waited a long time for it. I’m not a stadium concert type. It’s very difficult to feel a real emotional bond with someone who appears to be about the size of a pin head and so far away that there is a time-lag between their movements and the sounds they produce. But, it seems that with Green Day, I’ve missed the ‘intimate venue’ boat. I’m not quite sure why, as I’ve been a fan since I first heard ‘Pulling Teeth’  in 1996. Poor organisation I 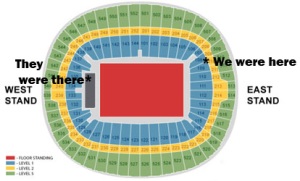 guess. I just never got round to getting to see them.

So, Wembley Stadium it has to be.  And it’s not such a bad place to have to be, I conclude as long as you don’t have to sit and  watch the English football team kick its way out of a paper bag. I sit glued to my seat. I say glued to my seat because almost  ‘on cue’ with the demand from Billie-Joe Armstrong, lead singer and guitarist to ‘Stand up!’ I go ‘off’ (This is when my Parkinson’s meds suddenly stop working: which they do around six times a day, and I am immobile until the next dose. This means, depending on the  severity of the ‘off” Mild –  loss of fine motor control, can’t use my hands/fingers, to Severe Inability to walk. Speech affected. Difficulty making myself understood. A bit like how I used to be every friday and saturday night when I was a younger man. Actually, don’t be fooled or let anyone try to fool you, being drunk is nothing like Parkinson’s or vice versa. Anyway, enough of that. This particular ‘off’ comes in at about point 6 on the Mild – Severe scale. ) Unfortunately, as everyone else is on their feet it means that for about half an hour all I had to look at was the backside of the bloke in front. Hmmmmmm… I’m just grateful (How crap is this going to sound?) that he is not a teenager, so at least I’m spared the ‘half-mast and droopy drawers look’. Thankfully, our heroes play for three hours, give or take a few minutes, so I didn’t feel too bad about having  sound but no vision for about eight or nine songs.

I must admit I had a bit of a ‘wobble’ during the week, over whether or not I’d be able to make it. I seem to have suffered another of my periodic downturns. Tickets were bought back in September, when I was on a bit more of an even keel. Therefore I hadn’t requested any special disabled facilities.  My mind starts to wander quite randomly as I patiently wait for the drugs to do their tricks. The stadium is clean, it’s comfortable – even for an old crock like me;  the stewards look like they might know what to do with me should anything untoward happen as a result of the PD. Briefly, my thoughts turn to the iconic Wembley Stadium #1 and in particular the badly tiled walls of red around the bath and showers in the players’ dressing room and the (apologies …) river of urine that once followed me down one of the east stairwells as I nipped out to find a drink during one of the  early ’80s Charity Shield matches. Forget which. Wembley Stadium #2 is infinately better. Don’t be taken in by any of that romantic horseshit about the wonders of the old stadium, by the time of my last visit it was a khazi. 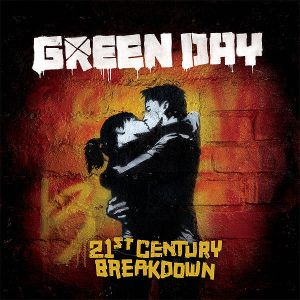 All of this is of no interest

All of this is of no interest whatsoever to Mike Dirnt (bass) and Tre´Cool (sticks) who along with Billie-Joe Armstrong are Green Day. The band emerged from the California Punk scene in 1987  and eight albums later are here again in the UK, promoting the latest, ’21st Century Breakdown’. I know they are augmented on stage by three touring semi-band members, whose names, spookily all begin with ‘J’, and possibly backing tracks, but they do make a great 3 – piece sound. Unfortunately, it all gets a bit lost inside Wembley. Don’t get me wrong, it’s punchy and loud, but I  didn’t feel it. Not like with Iggy. He was knocking at my chest wall. I am begining to return to something approaching humanity again when I hear: ‘Who wants some Old School Green Day?’

Now that sounds just the tonic; and with that, and the surprise comment ‘The old songs are better anyway’ Armstrong ushers in what is, for me the best part of the gig and includes favourites ‘Burnout’,  ‘Welcome To Paradise’,  ‘When I Come Around’, ‘Longview’ and the flawless ‘Basket Case’. All from the breakthrough album ‘Dookie’ (1994) in my view their best. Getting a game young banana out of the audience and up on to the stage to sing the notorious ‘Longview’ seemed quite a hoot. In fact, the young man in question – who gave his name as Rufus – was actually pretty good. He certainly cut the right shapes even if he was left wanting in the vocal department. Still, I would have prefered to hear Billie-Joe sing it, however – or even better, they had chosen me ….!

Stars in their Eyes

I could have done without the ‘Stars in their Eyes’ interlude, which comprised the band inexplicably playing versions of  Black Sabbath’s ‘Iron Man’, Guns ‘n’ Roses ‘Sweet Child O’ Mine’, AC/DC’s ‘Highway To Hell’. Then later ‘Shout’ Lulu, featuring Tre´Cool in drag – truly surreal. ‘Always Look on the Bright Side of Life’ Eric Idle’s finest hour, from The Life of Brian’, The Undertones’  ‘Teenage Kicks’,  Stones’ ‘(I Can’t Get No) Satisfaction’ ‘Paint It Black” and ‘Hey Jude’: I forget the name of the band …. I can only assume that it was some kind of reference to to the music that has shaped the Green Day sound. If so, a somewhat uninspiring selection I think personally, but then I never liked of any of them, except ‘Teenage Kicks’, ‘Shout’ and of course ‘ Bright Side of Life’.

The gig works its way toward conclusion with a great example of community singing as the Wembley crowd carries ‘American Idiot’ for the first verse .. and is bang on! While ‘Wake me up when September ends’ reminds me what a fine record – sorry CD and particular family favourite  ‘American Idiot’ is.

As is only fitting, ‘Good Riddance (Time of Your Life)’ closes and the general opinion from those around me is that Green Day had done the job. An opinion supported by almost everybody I hear on the long, tortuous trail out of the stadium in search of that most prized of trophies in Wembley – a legitimate space in which to stop a motor vehicle, without being descended upon by rabid, ticket-wielding traffic wardens.

And so to summarise, I went with my kids and had a blast!

Now the bad news. There are couple of things I need to get off my chest.

I must stress that what follows is not an attempt to compare Green Day and the Foo Fighters but it is impossible not to draw parallels. June 6 2008 headline in NME: ‘Foo Fighters play ‘biggest ever show’ at Wembley Stadium’. And on June 20th 2010: ‘Green Day play the biggest show of their ‘fucking lives’ at London’s Wembley Stadium’ Green Day lead singer Billie-Joe Armstrong announced: ‘”This is the biggest fucking show we have ever had in our lives. This is going to be the best rock ‘n’ roll show Wembley has ever seen.” (rock ‘n’ roll show? I thought I”d bought tickets to see Green Day play live? I guess this was the ‘Stars in their Eyes’ bit …) Likewise, Dave Grohl announced during the Foo Fighters’ gig something along the lines that it was going to be their best gig ever, the one ‘people will still be talking about in’ (was it 50 years’ time? Surely not?) Well, for a long time anyway. (Come to think of it how did he know this before it was even over?) Billie-Joe: “I tell you one thing, I’m going to remember this for the rest of my fucking life” They both continued to tell us  how much  they loved us and how much England meant to them… I think you get the picture … Now I think musicians ought to tread a little carefully here. Okay, of course I realise that during a gig, performers are often  carried away on waves of emotion us mere mortals cannot begin to imagine and so are liable to say – or sing things they might later wish they hadn’t.  However, they do need to allow their audiences the space to make up their own minds. There was a sense in which at both of these gigs, I felt as if I was repeatedly being told how big and massive and great it was. If I were cynical I might think, all part of the pre-packaging of a DVD box set planned to hit the  market: ooooohh, say about christmas time?

‘I said a-Heeyyy-Ohhhhh,  a-Heeyyyy- Ohhhh. I said a-Heeyyyy-Ohhhh  a-Heeyyyy- Ohhhh. ….’ Now I have a real problem  with  this:  Billie – Joe and Green Day’s choice of call-and-response. Intended, I expect to involve the audience. I’m sure I’m not the only one in the audience old enough to remember that its previous exponent was a certain Gordon Sumner with his band of bleached ‘Punk Wannabees’ the Police. And look what happened to him. Sting made pots of money – but apart from that: he’s a professional Geordie who never goes or lives there, wears Arran sweaters in the summer, has grown silly face-lace which makes him look like a tramp. He knits his own squiddly diddly folk music, much to the annoyance of those who have been writing and playing the stuff in pubs, clubs and, well … pubs and clubs for years; comes on telly to mystically tell us that ‘Autumn is a time for renewal …’ Or somesuch bollocks, and laughingly tells us that pubs and clubs are the lifeblood of music. (Seen his latest tour schedule?) So … don’t say I didn’t warn you, Billie-Joe, Mike, Tre´. Do something about it before it’s too late. Also, as if further criticsm were necessary although this probably says more about me than anything. Control over my (and quite probably many other audience members’) impulsive side is stretched to the limit, as I try to avoid calling back at the appropriate point:

‘Song of the Century’
’21st Century Breakdown’
‘Know Your Enemy’
‘East Jesus Nowhere’
‘Holiday’
‘The Static Age’
‘Give Me Novacaine’
‘Are We The Waiting’
‘St. Jimmy’
‘Boulevard Of Broken Dreams’
‘Nice Guys Finish Last’
‘Burnout’
‘Waiting’
‘Geek Stink Breath’
‘Dominated Love Slave’
‘Hitchin’ A Ride’
‘Welcome To Paradise ‘
‘When I Come Around’
‘Iron Man’/’Sweet Child O’ Mine’/’Highway To Hell’
‘Brain Stew’
‘Panic Song’
‘Jaded’
‘Longview’
‘Basket Case’
‘She’
‘King For A Day’
‘Shout’/’Always Look on the Bright Side of Life’/’Teenage Kicks’/'(I Can’t Get No) Satisfaction’/’Hey Jude’/’Paint It Black’
’21 Guns’
‘Minority’
‘American Idiot’
‘Jesus Of Suburbia’
‘When It’s Time’
‘Wake Me Up When September Ends’
‘Good Riddance (Time of Your Life)’