I vividly remember watching Phil  and team prepare  for, and attempt  to shatter the Guinness World Record  for the fastest  demolition of a piano by hand at ‘Cosmorama’ an ill-fated week-long jamboree of record-breaking attempts at Lingfield Racecourse in Surrey. I guess it would have been  1976.

The whole thing  was a dismal commercial failure, with sponsors and contestants backing out from the get-go. I belonged to a Venture Scout group, one of many which had volunteered to help officiate, marshal events etc. Basically because we didn’t cost anything except for our food. However, as the week drew on and things got progressively worse we began to get drafted in by the desparate organisers to take part in events that had been left bereft of contestants.  You will no doubt be fascinated to hear that in the summer of 1976, as a consequence I was a competitor in the World Record Walking Backwards attempt (unsuccessful)

The six-strong ‘Team Milner’s task was to smash a piano into fragments using only bare hands and feet. Then place the broken pieces through a nine-inch diameter hole. The world record at the time stood at two minutes 26 seconds. I  am afraid to say, back then that along with my fellow walking in reverse stars, I took a rather dim view of the whole concept of ‘breaking’ which we regarded, rather highly and mightily as mere thuggery. But as we got to know the team during the course of the week, we warmed to them. I was lucky enough to watch the spectacle, and recall it as a thrilling, pretty brutal assault: but no more than that. Again, as so often been the case, I wasn’t really paying attention or looking hard enough. In fact  Milner with five other members of the International Budo Association had  made  a previous unsuccessful attempt at the same record on the BBC children’s programme ‘The Record Breakers’ hosted  by Roy Castle. However, on this occasion as well as the clock, they were up against a Royal Navy team equipped with tools, and their own piano to demolish. These, they did beat, if not the McWhirters’ stop watches. perhaps the team needed a little more to get their teeth into:  like this 6 room early Victorian house at Idle, Bradford, Yorkshire which Milner and  fifteen International Budo karate enthusiasts demolished by head, foot and empty hand in 6 hours on 4th June 1972!  Once more The Guinness Book of Records was there to officiate. 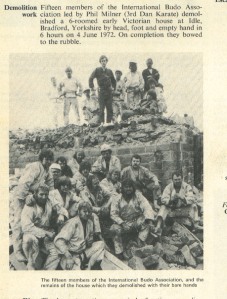 For those of you who are interested, the current record was set  on January 10, 2010 and stands at 1 minute 34.41 seconds and was set by a team of six players from the Gordon Rugby Football Club,  Sydney, NSW, Australia.)

I have vague memories of getting quite drunk with some of the team on the closing night of the extravaganza, before going off to heckle the MP who for the best part of the week had been making an attempt at the longest political speech – something we did every night along with telling jokes down the ‘communication pipe’ to the guy who had been buried alive on the previous monday and was still there. You think I’m making this up don’t you ?

Phil must have made an impact on me because I’ve never forgotten him. When I took up Taekwondo, well into my 40’s, and before Parkinson’s Disease set in, I found that one day this name popped into my head. I ‘Googled’ it and there he was: exactly as I remembered him.  Grandmaster Phil Milner, after 50 years practicing and teaching in the Martial Arts, Dai Hanshi Milner was awarded his 10th Dan in Jiu-Jitsu in 1999 for his skill and contribution to the world of Budo, for his countless achievements in the Martial Arts, his World Records and his tireless fund-raising for Charity. He died in 2000. 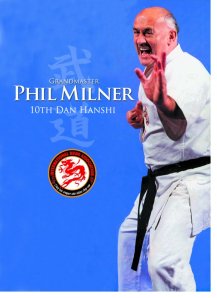