No it doesn’t. The above is just a shameless ploy to entice more visits and so improve my Blog readership figures. Still, as you are here you may as well join us on a journey into antiquity in order to get an insight into what life was like in Roman times for the graffiti writer. Admittedly not the most attractive of activities, you may think, but hold! There is more to it than meets the eye (just) and graffiti is as much a part of the history of the Romans as the literature of Ovid, Horace, Virgil and Seneca. 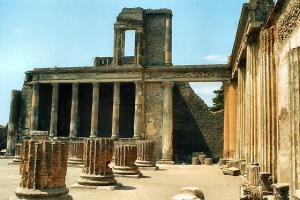 Please note this post deals the issue of Roman and contemporary toilet humour and while every attempt has been made to clean it up (if you see what I mean) It may not be suitable for those of a nervous disposition.

My Dad was in his element over Easter. This well-known and respected Latin and Classics scholar (at least he is to us) was in his element because he had an audience, one hanging with rapt attention, on his every word as he waxed lyrical about his visit to Pompeii and Herculaneum and the treasures he saw there. The audience was made up of his 6 grandchildren, to whom I am reliably informed by our eldest and senior of the group:

And deservedly so. He is.

Initially uncertain, his audience (whose ages span from 10 to 19) has been caught out many times before by their wily grandparent who starts out in all seriousness, well-informed and erudite with just the right balance of playful  humour and authority to command attention, only for him to spring an unexpected punch line, pun or go off at a tangent  on some ‘Shaggy Dog’ story or tall tale. (It will probably come as no surprise that he was a schoolmaster back in the day, and a good one at that too.)

But it seems that today they are to be spared a trip down the garden path. There are no traces of any wicked grins playing round the corners of his mouth. His charges relax.

In fact, he is doing something he loves, which is to explain some facet of  the Classical world with reference to our own, or vice versa; and in so doing, put whatever the subject under investigation, into context for his listener. Today the subject is graffiti. I forget exactly what prompted it, but he is telling them about some of the graffiti in Pompeii and Herculaneum.

Pompeii. Vesuvius in the background

Part of the tableux of a life lived in 79CE and left to us, courtesy of the devastation caused by the eruption of Vesuvius, is a rich and vibrant collection of graffiti in all its forms. Bawdy toilet humour, messages, jokes, riddles, politcal comment.  At one end of the scale some of it is surprisingly literate – translations or adaptations of classics of Latin literature such as Virgil, Ovid and Seneca, tantilisingly suggestive of a plurality that is almost Post-Modern. But hey, let’s not get carried away here. What we are interested in is quite the other end of the scale, such as the messages left on the walls of latrines or down back alleys. As my Dad points out much of this graffiti is surprisingly familiar, despite it being close to two thousand years old. He gives some examples like that on a latrine wall which kindly informs us:

(Apologies for any errors and the rather free tanslations. All of which are the sole responsibilty of the author)

Meanwhile, he compares the contemporary notices helpfully posted by the groundsman at a nearby recreation ground. In the ramshackle toilets he reminds patrons in no uncertain terms about proper use of urinals (apparently some youngsters – and maybe a few oldsters – are still unclear about the distinctly different modes of operation of water closet and urinal and the type of use each are designed for.) Along with the warning signs down many of the back alleys round where he lives that are intended to remind the general public of their responsiblities re: bodily waste, be it human or animal (notwithstanding  any local by-laws) he draws parallels, first with the inscription on a water tower in Herculaneum:

(‘Anyone who wants to drop the kids off at the pool at this point is advised to move along. Penalty charges  are in operation.’)

And found on a wall painting of Fortuna in  a corridor leading to latrine of IX.7.21/2.

‘Cacator cave malum, aut si contempseris, habeas Iovem iratum.’ (By Jove – perhaps in the style of Ken Dodd … –  By Jove, missus whoever it is who keeps crapping round here is going to make him (Jove) very angry)*

‘So,’ as my Dad concludes: ‘You see, things haven’t changed that much in the nineteen hundred  years since the volcano erupted and showered Pompeii with dust.’ 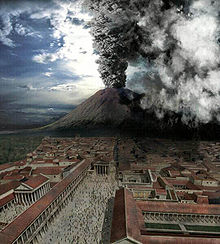 At which point, it becomes clear that not all the group have been listening with quite the level of attention we had thought, as our eldest pipes up on hearing this:

‘A volcano? In Portsmouth? Where?’

It was quite some time later, that we were able to dry our eyes and look at each other without triggering a recurrence of fits of giggles. Priceless.

Now it is possible, dear Reader, especially if you are not  familiar with English placenames and their histories: true or otherwise, that you may be feeling cheated of a punchline, particularly after having negotiated such a sloppy piece of writing. My apologies. Let me explain:

You see,  our eldest had, it seems been only half – listening to his Grandad’s wise words, for he had mixed up the names Pompeii –  famous Roman town overlooking the Gulf of Naples, devastated by the eruption of Vesuvius in 79 CE and Pompey – nickname for the English naval town of Portsmouth (where there is a noticeable absence of volcanos) and its football team. The moniker being result of one, the other or none of the following: 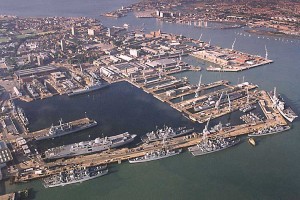 Bombay was part of the wedding gift of Catherine of Braganza to Charles II.

Portuguese seaman saw a resemblance between the two ports and may have called Portsmouth “Bom Bhia” which to English ears sounds like Pompey.

Dame Agnes Weston was describing the murder of the Roman general Pompey at a lecture to a naval audience. A member of the audience exclaimed “Poor old Pompey!” and this phrase stuck.

Ships entering Portsmouth harbour make an entry in the ship’s log Pom. P. as a reference to Portsmouth Point. Navigational charts also use this abbreviation. 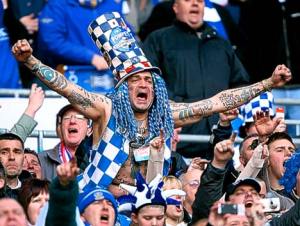 La Pompee was a captured French ship moored in Portsmouth and used for accommodation. (Captured 1793 and broken up 1817). There is a Yorkshire term “pompey” for prison or house of correction. Which is useful to know as Yorkshire is some 270 miles away.

Volunteer firemen in the eighteenth century (known as pompiers) exercised on Southsea Common.

In 1781, some Portsmouth sailors climbed Pompey’s pillar near Alexandria and became known as the “Pompey boys”.

The pomp and ceremony connected with the Royal Navy at Portsmouth led to the adoption of the nickname, “Pompey”.

‘Ledge’ or not, My Dad is left nonplussed, thunder stolen the result of  his grandson’s short attention span. Or was it? Part of me suspects  a ‘knowing ambush’ of his Grandad’s denouément  – if so his timing and delivery were faultlesss. I must ask him about that.

* Strictly speaking this – the bringing on of guest voices –  is considered very bad form in documents of a historical nature, but I just couldn’t resist it. Sorry.

Origins of name Pompey based on information from Royal Navy Museum.

2 thoughts on “Up Pompey. Study casts new light on antiquities discovered in Portsmouth and Southsea.”