I can’t help help feeling partly responsible for this. As those who know me will attest, many is the time I have droned on to anyone who will listen extolling the virtues of tattoos and tattooing – particularly since having one done on October 14th 1983, by Ossie ‘The Wizard’ at his studio on Byker Bridge, Newcastle Upon Tyne. It cost £5.00. It should have been £7.50 but ‘The Wizard’ didn’t have change.

What is it? Well, it is a rose on my left shoulder. Not terribly good really, but it strikes a nice balance between the raffish old-fashioned Portsmouth back-street style of tattoo, and a more modern sensibility in which my rose (or red cabbage – it depends on how I’m holding my arm) becomes symbolic: of fidelity and honour – my talisman.

Which brings me back to my point. Why are there so many crap tattoos around? These days it is rare to see an untarnished body, one without some dreadful scrawl on it.

When you see real tattoo mastery, the Japanese Irezumi, for instance, where the tattoo, its imagery and execution over musculature are ineluctably bound with the social and political stance of its wearer – or at least it was during its heyday of the 1850s and 60s. Much of today’s ‘flash’ (pre-prepared designs which usually decorate a studio walls, and which the client selects, usually by number) pales into insignificance. 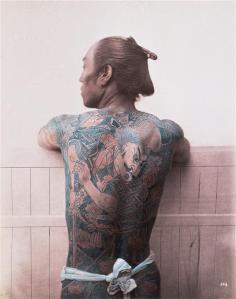 I am reminded of a lachrymose Scot who happened to be in the bed next to me when I was in hospital for my last bunch of surgery. As he tearfully explained to the surgeon. His main concern, despite the severity of the operation was not haemorrhage, infection, or possible paralysis, but the thought that the scarring would ruin the tattoo on his neck. He was delighted to find on regaining consciousness and his subsequent return to the ward from the recovery room that his fears had been unfounded.

And his tattoo? It was a series of dashes which formed a line around his neck, a small image of a pair of scissors and the legend “Cut Here”.

If you want to see quality contemporary tattooing