… and then it dawns, part way through the Chuck Berry number, that has become for me, at least, an anthem to mediocrity; that he is singing about himself. ‘Johnny’ is him. John Wilkinson. And at once the song takes on a completely different resonance and poignancy as its singer raises his hands to wave his goodbyes.

Last night, me and my minder, Stig went to see John Wilkinson play his second and final London full house of the week, under his stage name, Wilko Johnson. In fact, it was quite probably his last London show ever, because Wilko has been diagnosed with terminal Pancreatic Cancer. He is still in a state of ‘euphoria’ he describes it over the news which he received after falling ill during the tail end of a UK tour last autumn. Typically, Wilko decided that what was needed was a new album and a ‘farewell’ tour which has seen him play dates in France and the UK and which finishes in Guernsey at the weekend.

Dr Feelgood: you really wouldn’t want to take these boys home to meet Mum and Dad.

A strange response you might think, but not if you know any thing about Wilko Johnson, probably best known as founder member of the influential Canvey Island upstarts, Dr. Feelgood.

For a start, he is no mug. In fact Wilko has a very interesting CV, of which the Feelgoods are only a small part. He went to Newcastle University where he read English, specialising in Middle English and the Norse Sagas. Got a good degree (though he never collected his certificate: he was ‘tripping’) Travelled widely in India and Afghanistan, and taught English in a secondary school, is an accomplished painter and a keen astronomer with his own observatory on his roof at home in Southend.

Interest in Wilko has been on the up over the last couple of years, largely thanks to Julien Temple’s documentary film about the Feelgoods  ‘Oil City Confidential’.  But it has soared since his diagnosis was announced. There have been radio, newspaper and magazine interviews as well as TV appearances.Tickets for the original show at Koko, Camden Town last Wednesday sold out within an hour so a second date was added. The touts last night were reportedly asking £200 a ticket

And it was rammed: nowhere have I experienced such a density of bodies within a given space. I don’t know what the capacity for Koko is, but I’d be willing to bet it was well over last night. They were even standing in the toilets, doors open so they could watch on one of the numerous TV screens dotted about. Also, I was staggered by the number of photographers buzzing around the stage.  All slightly ironic, since Wilko has been for years doing the circuit, performing to the same small hardcore crowd, forever it seems consigned to that dullest of musical genres: Pub Rock.

Pub Rock it definitely wasn’t. Backed by the muscular rhthym section of drummer Dylan Howe and one of the world’s most underrated bass players Norman Watt-Roy, Wilko worked his way through All Through the City, Dr Dupree, Roxette, Sneaking Suspicion, Keep On Loving You, When I’m Gone, Paradise, Don’t Let Your Daddy Know, Back In The Night, Wooly Bully and She Does It Right – as only he can do. Eyes all speed-freak-stare with trademark robotic movements across the stage. There is no one else. He is a total one-off. But don’t be mislead.There was no room for sentiment. There was more than a glint of steel in Wilko’s performance.

When I first saw him in my teens, I thought how does he move across the stage like that? Well part of the reason was evident from my vantage point last night. Wilko still uses his trusty red coiled guitar lead; last in fashion when the New Seekers were riding high in the charts, and it is plugged straight into his amp. That’s right, not an effects pedal or stompbox nor the plateloads of spaghetti that accompany them in sight. Thus reducing his chances of tripping over same by 100%.

There were no embarrassing speeches no ‘surprise’ celebrity guests, Wilko seemed genuinely  touched that people had bothered to come out and see him in such numbers and looked, as did the rest of the band, like they were having a blast.

God bless you Wilko Johnson and remember when you get back to Southend if the ‘euphoria’ starts to wear off and the old black dog starts following you again: 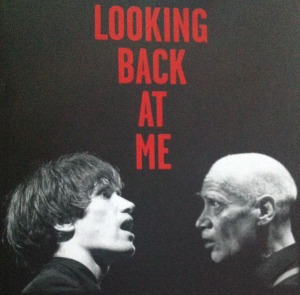