What with all the furore over some baking programme, you may have missed this excellent series which tests the painting skills of its contestants with a series of challenges to find out who is the Master painter.

It all came to a head last week in the idyllic surroundings of the St Ives School of Painting; established by Leonard Fuller in the historic Porthmeor studios at the centre of St Ives’ artists’ quarter in 1938. Artists who have lived and worked in the town include Ben and Winifred Nicholson, Barbara Hepworth, Naum Gabo, Roger Hilton and Terry Frost  to name but a few. It makes a fine setting for  the grand finale.

And guess who is in the final?

That’s right. Your’s truly. Along with Peggy and Alison.

If you have no idea what I am babbling on about, The Great British Paint Off is the ultimate painting battle where passionate amateur painting fans compete to be crowned the UK’s Master Painter. Over the course of 10 hour-long episodes, the series follows the trials and tribulations of the competitors, young and old, from every background and every corner of Britain, as they attempt to prove their painting prowess, under the watchful eyes of our judges, ably assisted by random comedians. Each week the painters tackle a different skill, which become progressively more difficult as the competition unfolds. Their knowledge of the practical aspects of painting are thoroughly tested as is their nerve and ablity to cope with pressure.

Testing the painters’ personality, creative flair and painting ability, the main challenge here is to produce something robust and conceptually sound. It will show a mastery of technique as well as confidence with colour whether it be naturalistic, symbolic or expressive.

This challenge separates the wheat from the chaff. Take one basic genre, and with the same instructions, ask our painters to produce a finished product… sound easy? Well, any variation on the finished product will be a result of their own technical knowledge and experience – or lack of. Painters are laid bare in this task and this is where the pressure’s really on in the Paint-off.

The gloves are off in this final challenge where the painters are able to showcase their depth of skill and talent. The complexities of this task call for a professional standard in style AND substance. Are they up to it? The judges will be looking for the most impressive and creative creations.

The Chuckle Brothers. Paul and Barry Elliott found their first taste of success when they won the television talent show Opportunity Knocks in 1967 and since then have appeared in a number of TV and radio shows, the most memorable being their BAFTA nominated ‘Chucklevision’. Best known for their catchphrase ‘To Me … to You … to Me … to You … PAINT!’ 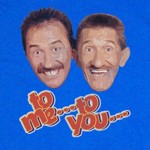 ‘Nasty Nick’ is Director of the Tate and with it the country’s major collection of Modern/Contemporary Art at the Tate Modern and British Painting and sculpture at Tate Britain. Formerly in charge of the Whitechapel Gallery, he has also been chairperson of the Turner Prize Jury. It is widely rumoured that he doesn’t in fact like painting at all.

David Hockney is the nation’s favourite painter. After studying at the Royal College, she emerged into the London of the ‘Swinging Sixties’. It wasn’t long before LA called, and Hockney gained attention for her ‘Pop’ treatment of such subjects as portraits and swimming pools. Recently returned to live in Bridlington from where she has been producing landscape paintings with her i-pad. 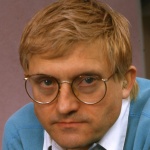 So, how did I do? (If you don’t want to see the results till you’ve watched it on I Player, look away now)

Well, my initial happiness at being given the subject ‘An Andy Warhol Portrait’ for the Signature piece soon evaporates as I realise it is not as easy as it looks. I make the mistake of trying to be clever and do a modern take on the ‘Marilyn Diptych’, using Miley Cyrus as the subject. I’ve

had better ideas. Especially seeing as I didn’t check the composition of the photo emulsion you coat the silkscreen with in order to make the printed repeat heads.  It was  water-based and because I was using acrylic paint, the photo stencil started to break down after five or six prints. I managed to keep it together by plugging the holes with newsprint, but it still came out looking more like Simon Cowell than Miley.

I was dreading hearing Barry Chuckle announce ‘Painters put down your brushes, time’s up!’

Nick was particularly scathing, saying he’d never seen anything so … er I think the word was incompetent, in his life; and seemed to enjoy pointing out that where the failed stencil allowed the ink to run through and mix with the paint it left rather a soggy bottom.

David was much kinder. She thought my textures were ‘scrummy’ and that the painting as a whole had ‘lots of bite’.

However, I get the wooden spoon. Peggy wins this particlar challenge with a cunning portrait of David Cameron painted as though it was one of Warhol’s Death and Disaster series.

So on to the next test, the Technical Challenge.

Which is, explains Paul Chuckle, to produce an altar panel, that uses quatrocento icongraphy, space, colour, symbolism and media. Piece of cake. Now where’s my recipie for gesso and my Lapis Lazuli?

I decide to paint a Baptism of Christ on a poplar panel with egg tempera. Once I’m back from Poplar with the panel, I don’t have a lot of time left, but I‘m still feeling quietly confident. I am using a traditional gesso with a rabbit skin binder (phew!) chalk and some white pigment to create a suitable substrate on the poplar in order to use my egg tempera. It is a tricky business, but once all the layers are dry, I begin painting with the egg tempera; which is basically ground pigment mixed with egg yolk.

I work fast, using Piero Della Francesca as my model. I have Christ and his cousin in the foregound in naturalistic space with the landscape, more banks of the Arno than the banks of the Jordan, sweeping away into the distance. I even manage a bit of hidden geometry as I work in two circles of equal radius, centered on the Dove From Above and the water droplet as it falls onto Christ’s forehead. Adding faces to these circles to create happy and sad emoticons, in retrospect wasn’t a good idea.

The wheels begin to come off, or rather the paint begins to come off as I make my way to the judging table. Bugger! My gesso is lifting off the panel and taking the paint with it.

Nick: ‘This one is a clumsy and crass collision between the traditional and the contemporary’ (See? I knew the emoticons were a bad idea)

‘So it’s Post-Modern then?’ I suggest helpfully.

‘What we’re trying to say’ adds Hockney ‘is that when you do a pain’ing like this, (She doesn’t pronounce the ‘t’) at this level you’ve got to get everything right. I mean this pain’ing would look fine in a little gallery in Harrogate as a Renaissance pastiche, but not really here.’

‘No not really here’ echoes Nick.

I am beginning to wish he would shut his cakehole.

Alison takes the Technical with her paintings of scenes from the life of St. Peter done as pradella panels.

I am beginning to get a bad feeling about this.

And so, onto the final test, the Showstopper Challenge. Barry and Paul send the judges out of the studio and I close my eyes as they announce our final test: ‘Domestic Interior’ and ‘No slacking’. That’s all they say. Oh crikey! I wasn’t expecting this.  Alison has made a flying start and is working on a still life on a table in front of a window, showing the flowers from the cottage garden outside.

Eggs, bacon and a slice. Do you want anything else with that love?

Peggy goes for an ambitious composition, loosely based on Velazquez’s ‘Old Woman Cooking Eggs’ – ‘Old Woman Making Sushi’ while I go for a Georges Braque/Patrick Caulfield-inspired kind of Synthetic  Cubism Still Life with collaged real objects. What could go wrong?

Well. Quite a lot as it happens.

I tackle a canvas which is way too big in the time allowed and I don’t fully resolve the rich textured surfaces of Braque with the flat minimalist colour areas lifted from Caulfield. ‘Oh dear oh dear’ says Paul as he looks from my painting to the clock and back again. I scratch some scraffito passages down the left hand side which look OK. The paint looks lovely and buttery but it is obvious I have bitten off more than I can chew, even if it is al dente (or do I mean impasto?) Anyway, the result is more ‘Dog’s Breakfast’ than idyllic interior scene.

Finally, the Chuckle Brothers put me out of my misery and we are banished from the studio as the judges deliberate.

It doesn’t take them long. They emerge from the studio and Barry makes the announcement.

Well I could see it coming frankly. Alison gets the trophy and I get to clean the brushes.

I’m done with painting. I reckon I’m going to dust of my Mum’s old cookery books and have a go at some baking.

Unfortunately it has not been possible to show any of the paintings produced in the competition due to copyright issues (Phew!) Thanks to all the Veroccio Gang Summer 2013, The St. Ives Gang Autumn 2013, Maggie, Rob, Pat, Gary, Alice and Marion.