Let me introduce you to the three key players to start with.

First and foremost is My Best Mate Aky, long-time resident of these pages and the person responsible for securing me gainful employment: first at Victoria Wine 104, Marylebone High Street and eventually at Hangovers.

Arthur. The Boss. The ‘Great White Chief.’ Forget  ‘Only Fools and Horses’, ‘Minder’ and all that old bollocks, Arthur was the real deal: a genuine Cockney wide boy who always fell on his feet. Out of Gillespie Road, Arsenal via Highbury Grove School, where Headteacher  Dr. Rhodes Boyson played a latter-day Gradgrind to Arthur’s Artful Dodger; he had a disarming grin as broad as the northern entrance to the Blackwall tunnel  (which endearingly revealed his missing molars) and an infectious cackle of a laugh. Good-humoured (I never once saw him angry; well, not so you would notice) and generous to a fault, he was impossible not to like. Arthur  always wore a branded T or polo shirt, jeans and white trainers with a light casual leather jacket in the winter time. His only accessory was a rolled up bundle of genuine high-spec folding money stuffed into his front jeans pocket. Because we worked long hours (The shop was open 8am – 8pm) it could often be quite boring with little in the way of ‘creature comforts’ (unless you include draught Ruddles piped up to the counter) so the unwritten rule was that friends could visit at any time, chew the fat and help themselves to whatever they fancied (within reason) as long as they were prepared to pitch in and help out should, say a delivery arrive and a van need unloading or we have a minor panic about something.

Kenneth Whitehead. Ken. Arthur’s mentor. Originally from Sunderland he came down to London in the ’60s to make his fortune. He loved everything about the ’60s: the music and fashion. As with all genuine sixties people he didn’t seem to remember much about it and was noticeably vague and evasive when quizzed about what he actually did during this pivotal decade. When I met him, Ken ran Victoria Wine’s  Berwick Street Soho shop. A shop, incidentally, that Those In The Know, gave less than a month, judging its location as a massively naive mistake on the part of Victoria Wine; the general consensus being that it would succumb either to a single large-scale heist or organised, concentrated and relentless petty thieving. Berwick Street  market, right outside its front door, aside from the fact that at the time it had a number of ambitious … let’s call them ‘Local Entrepreneurs’ working on it, conveniently provided an impenetrable space: ideal should someone or something need to be hidden in a hurry. 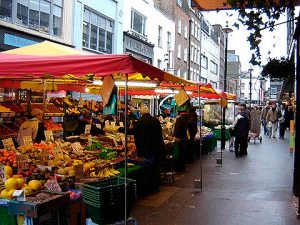 In fact, Ken proved Those In The Know completely wrong for within a week, he and the ‘Local Entrepreneurs’ had come to a series of agreements concerning a variety of merchandise, its handling and storage, which was to be beneficial to one and all; some of which may or may not have included some, all or none of the following: (Firearms, Drugs, Clothes esp. cashmere jumpers, cassette tapes and CDs, cash money, Concert Tickets, Gold Bullion, etc.)  Thus the shop enjoyed protected status and went on to do good business, which would have been even better were it not for extremely efficient practice of its charismatic manager. Bookwork and paperwork out of the way before the rest of the staff arrived in the morning to open up, he would take his first drink of the day (Lanson Black label champagne or a brandy, depending on how the mood took him) just before opening time at 9:am. On the face of it a genial, good-natured bear of a guy with his Dire Straits, casual button down collar, jumper, neat jeans and (like his protegé) white trainers, You underestimated him at your peril, for running through him was a streak of pure steel. It was not considered wise to mess with Ken.

By 11:00, after supervising a tidy of the shop and the ‘bottling up’ of any depleted shelves, the serious drinking would begin. Ken would appoint his ‘Second in Command’ then disappear for the afternoon, popping in from time to time to check things were OK, and if he felt inclined, take us for lunch. If he  ever needed to be found in a hurry (Remember, this is in the days before mobile phones) there were three triangulation points that were key in locating his whereabouts. ‘Moira’s Massage Parlour’ in Queen Anne’s Court,  The Blue Posts, which stands on the corner of Berwick Street market, and ‘The Club’ on D’Arblay Street (This still being the era of much tighter licensing laws) ‘The Club’ was a shabby illegal all-day drinking hole. A ‘Speakeasy’ if you will. 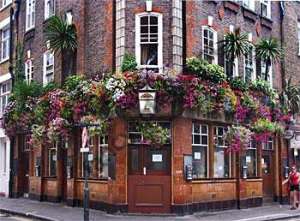 If Ken wasn’t to be found within the ‘Soho Triangle’ which, to be fair was not often, chances were he could be anywhere or more likely in Topo Gigio’s.