Okay, here we are then, sorry about the wait, I had to ppppppick up a prescription from the Chemist as well. Now, you were asking about Going Over The ‘High Side’.

It has a faintly Romantic, poetic air about it. Don’t you agree? Before I put you out of your misery – if you are still in the dark –  let’s quickly see what you think. What does it suggest to you? What sort of things do you visualise when you hear the phrase?

What do you think?

A Scottish poem or song? Okay, Let ‘s run with that. You mean the kind of quaint ditty you might expect to find rugged locals in equally rugged Highland bars selecting for their weapon of choice as they spontaneously burst into song  – as the Scots, of course, are apt to do:

Whereupon they roam round the bar in their kilt of family tartan, complete with sporran gazing one by one into the eyes of each punter before turning to the (imaginary) TV camera and the (imaginary) audience watching at home… perhaps intent on wishing them a Happy Hogmanay, good luck in the Curling or to thank Auntie Mo in Glasgow for the Christmas cake she sent: a resounding success, she had decorated it with icing over a generous layer of Tamazepam.

Mountains?  Yes, mountains. It could suggest hideously treacherous, doubly-difficult alternative routes on peaks at the roof of the world that are even closer to the sky and which only the bravest or foolhardy Englishmen (in hob-nailed boots, pieces of cardboard stuck over their noses and pockets stuffed with Kendal Mint Cake) or Americans (in Beany hats, Oakley sunglasses and surfing shorts) would attempt to conquer, as water, ice and boulders as big as cars rain down on them from all points.

I’m going to jump on my bike

Entertaining, both of them, but Going over the ‘High Side’ is none of these.

Tell you what. I’m going to jump on my bike and show you something.  Why don’t you join me? Literally – I mean: if you have ‘Google Earth’ or ‘Google Maps.’ Otherwise, metaphorically come with me. Just imagine it – like we used to have to do in the old days.

Either way, I’ll meet you in Hillingdon, Middlesex, UK. At the juncton of Field End Road and Sunningdale Avenue in Eastcote. While those of you that are taking the ‘interactive’ option attend to that, I ought to say by way of introduction, if you are not aware, you are about to navigate roads built during the 1930s. The styles of houses, street planning and layout are all very typical of London’s suburban ‘Metro-land’. A pastoral idyll, within easy reach of the office. A little slice of Buckinghamshire, Hertfordshire, or in this case Middlesex, that in the 1930s was what one aspired to in order to escape the brutality and coarseness of our capital city. Or Manchester, or Newcastle Upon Tyne, or Birmingham or wherever. 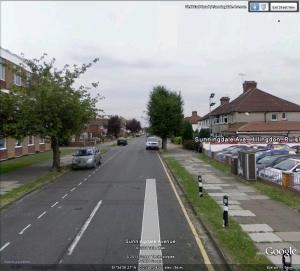 All here? The Wonder/Evil of Google Earth

Now, We all here? If you can, navigate to ‘Street Level’. That’s right, drag the little man there. (Sounds hideous doesn’t it? “Drag the little man down to street level – where he can live in the gutter: that will teach him to get ideas above his station” For the uninitiated this entails dragging a symbol of a human figure onto the aerial Goggle Earth image, which results in the picture on your monitor re-configuring itself so that you see what you would, more or less at eye level were you actually standing at your chosen spot.) And very alarming it is too, I have to say. A wonderful resource? I don’t know. Personally I think it’s a step too far.

Anyway face north east-ish, and you should have your back to Field End Road. Look to the left here you will see a post box and to your right a Nissan dealer’s garage. We need to go carefully here folks; you would do well to study  very carefully the parking restrictions and avoid ‘taking a chance’. We’ve seen the ‘Ticket-Happy’ wardens round here, park illegallythemselves, go do 10 minutes furious ticketing, then bugger off somewhere else.

We are headed along Sunningdale Avenue, about to turn right into Newnham Avenue. As we do – careful with that silver Volkswagen; he/she looks in a bit of a hurry. As we approach the junction with Newnham, taking care with the same Volkswagen we met a few seconds ago, and which seems to be going back in time (or doing a lot of reversing.)

Now, just before we make our turn right into Newnham Avenue, quickly cast a glance left: you  should see a double-fronted building with a green door and porch. This is no longer there. Some kind of Local Area Health Authority care centre, it was recently sold off for development, and last week it was undergoing demolition. 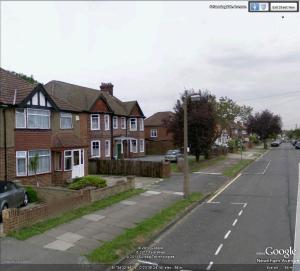 My story starts here. Last Friday around five o’ clock, Iwas cycling back from the shops at Eastcote, rucksack  on my back, laden with food for our evening meal. Just prior to making the right-turn into Newnham Avenue, I saw that the demolition work on this site was underway. It caught my attention, as for ever on the look out for interesting subject matter for my photography, it seemed an appealing prospect. Both roads were clear: in fact there wasn’t another soul around.

As you can see

Interactive followers, if you haven’t done so already, make your turn now. As you enter the street, which runs downhill, fairly steeply for this area of Ruislip: aside from the couple on the right, pruning their hedge, you will notice on your left two driveways, providing rear access to some garages
and beyond, highlighted by the yellow roadmarkings, Newnham School  entrance. It was somewhere between the two that I went over the ‘high side’. 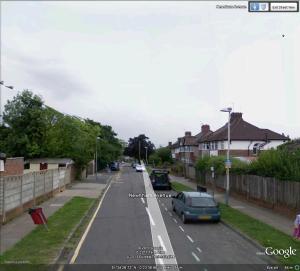 Stand (you really are getting a full kinaesthetic experience today) feet about shoulder width apart, dip your left knee – not too deep. Now, before you make any realignment or compensation, your right side (knee, hip,  shoulder) are all higher than  your left. In other words, your ‘high’ side; and if you repeat with your right knee … You get the idea.

Going Over ‘The High Side’

Going Over ‘The High Side’ is a term used to describe a crash in which a motorcycle or pushbike is leaned over, often when cornering. Usually rear wheel traction is lost then suddenly and forcefully regained again, violently flipping the bike away from the direction of lean and throwing the rider over the ‘high side’. Most injuries occur as a result of a high side since the rider has much further to fall. The bike then basically rotates using the bearing in the axle of the front wheel as an axis, and more often than not, follows the rider into the air and then it comes back down, to frequently land on top of him. The most common injuries are broken collarbones, shoulders, arm and hand, particularly a small bone called ‘the Scaphoid’ which often becomes victim as the rider attempts to break his or her fall.

For my part, I was riding along, picking up speed after having slowed down to look at the demolition site back on Sunningdale Avenue. I was standing up off the pedals and to increase momentum, allowing the bike to flip from one side to another beneath me. Without warning, just before the
school entrance, I felt a sharp jolt on the bike (I thought the chain had come off and snagged) this is where traction was lost, enough to make my right foot slip off its pedal. As the bike lurched, I lost balance and with the bars twisting violently around and under me, it uncermoniously spat me off.

My immediate thought was ‘Please, not a break!’ … what with surgery in the offing and all …  I was granted that strangely clear and lucid slow motion ‘life passing before your eyes’: a moment I remember a little too fondly from childhood. Ominously, I saw myself plastered up after injuries sustained; leaving me just time enough to think: ‘this broken up old tarmac with its holes and loose stones is going to hurt …’

I lay on my right side, legs tangled up in the bike. My shoulder and right arm took  most of the impact. Miraculously, my head avoided contact and my arm and shoulder on initial inspection seemed okay.(I had feared a broken collarbone.) I got up, collected the bike, counted my arms and legs, checked the contents of the rucksack and continued back home. Closer inspection back at base revealed surprisingly small patches of ‘Road Rash’ on my hands, knees (and boomps-a-daisy) elbow plus a bit of bruising to my shoulder, ribs and some squashed scones. The worst thing has been the soreness to my ribs – possibly the result of the handlebars twisting round under me as I got out of shape, then I guess a wallop from the end of the bar  or more likely the brake lever as I hit the deck.

Now it was the following day that I cycled up to take photos of the demolition site. As I cycled back down Newnham Avenue again, my words from the day before came back to me:

The biggest potholes this side of ….

‘this broken up old tarmac with its holes and loose stones …’ I stopped and took a closer look. The road surface here has been bad for a long while, particularly so after the winter, but what I saw came as quite a shock. For the stretch where I had come off was pock-marked with the biggest potholes this side of … of …wherever there are lots of big potholes.

Hmmmm… Going into one of these things would have certainly been enough to throw my foot off the pedal and cause such a spill as mine. 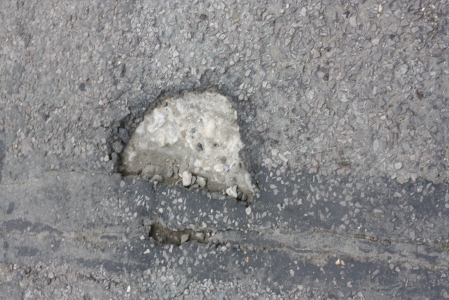 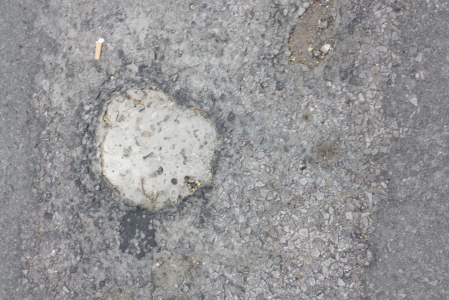 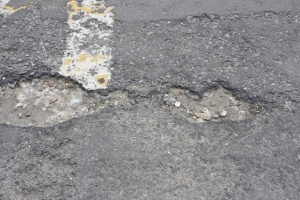 Biggest potholes this side of ….

So, there we have it. As I said, at the time of the ‘incident’ both roads were deserted, there wasn’t another soul around to have witnessed it. Interestingly, however – and I am not making any suggestions, nor drawing any conclusions and I freely admit I wasn’t looking 100% forward, after straining backwards to catch a glimpse of this demolition site: in my experience never the best  position to pilot a moving vehicle from, but – within a few days I noticed that the offending holes (if you’ll pardon the expression) had been hurridly and in my humble opinion, inexpertly filled. 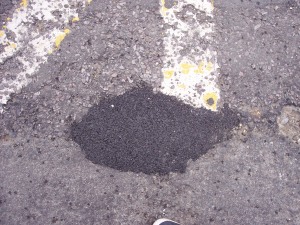 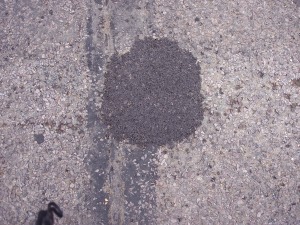 Tired of Potholes? Go to potholes.co.uk