We used to make some shite in our Craft lessons at school didn’t we? 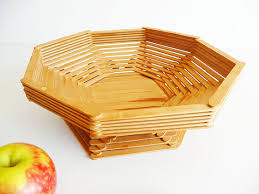 I once spent a whole half a term glueing lolly sticks together to create a fruit bowl. Other equally spectacular outcomes were a copper ‘matchbox protector’ (why?), and an orange plastic lampshade. Our bemused expressions on being asked to make them, only matched by those of our parents when we took them home at the end of term. Of course this was in the ‘70s, when you could get away with crap lessons like that, and an orange plastic lampshade didn’t look too hideously out of place in the average sitting room.

Let’s face it; most craftrooms back then were an irresistable treasure trove of exotica to be nicked and fucked about with. The tools! Lathes, drills, buffing machines, chisels, saws. The possibilities for causing death or serious injury were endless. Every time the teacher left the room (which was almost all the lesson in some cases) we would let fly. Pieces of wood, tools, metal, peoples’ ‘Jobs’ (as our work was quaintly known) would be pelted across the classroom. How the fuck we didn’t end up getting cut to ribbons I’ll never know.
All gone now of course. Replaced by the sober workbench and ubiquitous network of PCs. And Technology
All of which reminds me of a story told to me by a teacher freind of mine. She worked at Chantry, a special school for ‘maladjusted’ children as it was known then. She had a particularly difficult group who were almost impossible to get settled and concentrating on anything. That was until she introduced them to a bit of sewing or perhaps more correctly, needlework.

For miracle of miracles; when she got out the sewing kit and once they had got bored with trying to jab each other, they simmered down and got into some learning some basic techniques.
Well, it was into one of these lessons one jolly morning that a school inspector (This was pre-OFSTED) purposefully strode and took up her position to observe the lesson. Apart from making ‘V’ signs behind her back, the kids completely ignored the visitor. Meanwhile, the teacher explained to the students what they had to do, and they got started.

A relative calm descended. The teacher went around, helping out. As she did so Mrs. Inspector takes it upon herself to poke around and give the students the benefit of her expertise. She stood and looked for a long time over the shoulder of one of the boys, which had the visitor even the slightest awareness of body language and the intimate classroom dynamics of such a teaching situation is the boy she would have made a point of steering well clear of.
“Oh no no no!” said the inspector. Silence. The students looked from one to another, open-mouthed.
“Oh no no no! That won’t do. That bit there. It isn’t straight .” You could hear a pin drop.
Without looking up the boy replied: “Yeah? Well you’ve got a fucking big nose, but I wasn’t gonna say nothing”

As it happens the Inspector turned out to be the sister of one of this county’s great female sporting legends.
And she’s got a fucking big nose too.