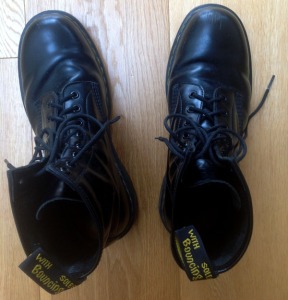 Black. For ceremonial duties. My other pair are oxblood: general purpose.

Now then, we all know of my love affair with Doc Marten Boots, Bouncing Soles, Air Wear and all that.

However, great though they may be, they have as I have said elsewhere, an achilles heel, so to speak. Namely the vulcanised rubber sole, which although resistant to oil, fat, petrol, acid and alkali are bloody useless when it come to heat. Once the integrity of the sole has been compromised by exposure to heat, the air cushions within the sole start to leak and the air starts being squeezed out; so as you walk along your boot gives out a ‘phut phut phut ‘noise.

Once you have a hole that is it. Worst is winter when you have a permanently wet/cold foot. I know this because I once go around for six months with a holy boot (see http://wp.me/pMUy3-2d ) Here’s how it happened.

In 1983, briefly, a jumble of arms and legs wrapped up in a leather jacket known as Dave Kimberley moved into our cosy 3 bed semi in the West End of Newcaste. Dave’s looks were not disimilar to those of a young Sid Vicious but with better skin. Plus he didn’t do drugs unlke soppy Sid who is the biggest smack heroin head until he is sent down to Robben Island, then Alcatraz where he meets a guy called Jean Genet who can turn himself into a butterfly or Papillon and they both escape only to meet with disaster when they fly too close to the sun and plummet to their deaths in the Hudson River (N.B. Don’t take this as gospel. I may have got my prison stories a bit mixed up)

Anyway, it is summer time and we decide to go somewhere for a holday, and that somewhere is Filey. Dave drives down on his blue Honda CB 250. While I get the bus. 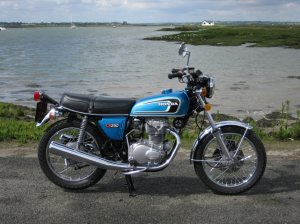 Well, we get some weather and spend a glorious few days on the beach going among the rock pools, sunbathing, eating fish and chips and getting pissed as much as possible.

At the end of the week, Dave offers to take me back to Newcastle on the bike and foolishly I agree. Ever had a bad idea? The first drops of rain began to fall as we said ‘farewell’ to Filey and got underway. I was unprepared for the journey to say the least. I had Dave’s spare helmet, a cagoule over my MA1 jacket and my Docs on my feet. I was certainly not prepared for the storm of biblical proportions which followed. Nevertheless, we soldiered on. After an hour or so we came upon a flooded road junction. Dave was taking it slowly, the water lapping at the footrests of the bike just as some tosser in a Range Rover coming in the opposite direction takes the junction way too fast and creates a tidal wave that Hokusai would have been proud of. Dave sees it coming and leans into it, so the body of water hits the top of his crash helmet. Me, I am looking to the left for approaching traffic. I turn to look right at precisely the wrong moment and well … you know how cagoules have that zip at the neck, which when unfastened forms a funnel-like shape? … I take the full force of the wave. It poured straight down this convenient funnel, soaking me from the inside. 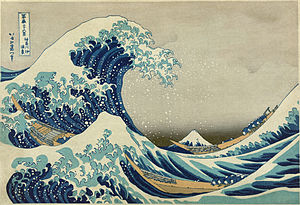 Hell’s teeth what a journey! I have never been so cold in my life… and it was July! I remember stopping on the A19 not far from Stockton for a piss and being so stiff I couldn’t even get off the bike.

We got back to our cosy semi about nine o’clock. I was so cold. We lit a fire using some old furniture in an attempt to thaw wor oot. Nothing could stop me from shivering, hot cups of tea – nothing, and it was sitting like this, with my legs up on the fire surround, that I melted my Bouncing Soles.

The perfect end to a perfect day.