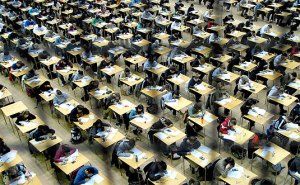 I know you hate it. I did too.

It’s that moment in the exam hall, when you’re desperately trying to concentrate You are dredging your memory, putting all your faith in the tricks you have been taught to release these vital golden nuggets: Associate, Visualize, Review, Read, Recite, Rewrite, Repeat, Mnemonics – Rhyme, Acronym etc.

What were the second and third singles off of the N-Dubz album ‘Against All Odds’?

One of the teachers invigilating decides at this critical point of the History exam to come and stand right behind you. They click their heels on the floor/very deliberately avoid clicking their heels on the floor (just as irritating)/jangle loose change in their pocket/have a conversation with another member of staff or just stand there; which is all the more infuriating, because you can’t see what they are doing; what they are looking over your shoulder at.

Thankfully, Teacher/Invigilator has moved off to wind up someone else now.

Where are they now? A quick look up confirms that the restless teacher is over the other side of the hall.

Right what’s the next question? ‘What did Germany contribute to the Spanish Civil War?’ Oerr … Now what was the name of that third track off the last B-Tight album ….?

To be fair, the regulations for examination invigilation require that teachers/invigilators should actively patrol the exam hall at all times. But what do they think about? It must be so boring.

Well, sometimes they play games. When I was a teacher, back in the days of chalk and talk, we used to play Battleships! That’s right, the old ‘guessing game’ invented by Clifford Von Wickler (not a made – up name I promise)

We’d ‘divvy’ up the hall using the columns and rows of exam tables to make our battle grids on squared paper; one on which we would arrange our ‘battle group’ of 5 aircraft carriers, 4 battleships, 3 destroyers,  3 submarines and 2  patrol boats and on the other we recorded our hits and misses. It worked equally well as a group game, or in single – player mode.

All you simply did as the game (exam) commenced, was amble over your opponent’s territory and stand by the desk you wished to attack. A signal from your opposite number would tell you whether it was a ‘hit’ and if so, what class of vessel or ‘miss’.

So if you ever heard a teacher in the middle of an exam, momentarily forgetting where they were, stifle what appeared to be a triumphant yelp, or punch the air with glee; you now know what it was. They had just sunk someone’s last remaining aircraft carrier.

As for those folders crammed full of sheets with lists of names and huge numbers of letter/number combinations such as A1, B 1, C2,  B2, C3 etc. that you see some teachers glued to, such that they take them everywhere (even home) or that fill every available space in Heads of Departments, Faculties, or Assistant Deputies’ offices. Don’t be fooled! They are not  Target Minimum, Attainment or Report grades, merely old ‘Battleship’ game cards. Though I can’t say in all certainty that no teachers have ever got the two mixed up.

PS. Yes, yes I know: Proof read before you publish it. I will get the hang of it – Promise!