As the penultimate in the recent series of stories about dreams, I offer you a particularly spooky dream my eldest son had a couple of months ago while on holiday.

Amongst other things, he is a qualified Lifeguard and as such a very handy person to have around if you happen to be near water (eg. Bathroom, Kitchen etc)

Well his dream goes like this. He is walking past the swimming pool belonging to an adjacent block of flats and  becomes aware of somebody in difficulty at the far end. Of course, he doesn’t think twice, and launches himself in to save the flailing figure.

Automatically, he begins to carry out the rescue procedure, only to find out that as he does, his ‘victim’ begins to fight and force him under…. Now this wasn’t in his training programme. You expect a bit of resistance from petrified potential fishbait, but not this. This was a strong, fit young man who had obviously been lying, or more correctly´’floating’ in wait for him.

Anyway, cut a long story short, my son ‘saves’ the man and drags him out of the pool, by which time assistance has arrived…

(This is where it gets weird) … because of his demonstration of selflesness and public spirit he is rewarded by the local council with a civic reception in Uxbridge, followed by Sunday Lunch and an afternoon spent in the company of Harry and Jamie Redknapp! 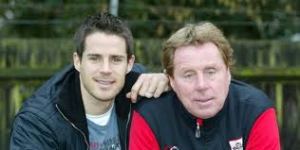 Jamie and Harry. Sunday Lunch anyone?

Have a crack at that one, Sigmund.

(For the benefit of my ‘Global’ readership, some of whom will not be familiar with the Redknapps: they are former Football (Soccer)player and now manager of Tottenham Hotspur, Dad Harry; and former player, now TV pundit, son Jamie. As random a pair as you could pick in the context of the above)