Take 43 artists and designers from all over the UK, with backgrounds in a variety of disciplines: painting, printmaking, sculpture, ceramics, graphic design, interior design, place them in a bewildering variety of London schools, give them a disused car showroom and workshops in the New Cross one way system as a base and watch them go through the trials and tribulations, the heartache and pressures of teaching Art to classes of young people.

Doesn’t sound a very promising scenario does it?

Well it was a blast. Largely because of the people involved. The Goldsmiths College Art Teachers Certificate course 1984/5 contained a great mix of personalities. We worked well as a team and we looked out for each other. We were sounding boards to bounce ideas off or shoulders to cry on. We supported each other. We worked hard and played hard.

The course was unique in its structure. We worked three days a week in our placement schools or colleges, had one day (Tuesday) of lectures/seminars/tutorials. The Wednesday was a studio day, which meant developing your own work as an artist, designer or craftsperson. It was a central tenet of the course that we continue as visual arts practitioners.

This was all directed from the course base in the old M & B Motors garage on Lewisham Way opposite the main campus. The workshops transformed into a studio, the showroom into a lecture room.

Some of my fondest memories are of the trip to Amsterdam. Ostensibly to study the Dutch system of education, specifically in Art and Design, it was in effect an end of course ‘jolly’ which allowed us to have a bit of R & R after a long hard year and before going our separate ways.

The photo shows us at Liverpool street station. It is 8:30am, we have just got off the train from Harwich after an overnight crossing from the Hook of Holland. We all look a bit dazed and confused. Which is not surprising after four days of heavy drinking in Amsterdam. I also have vague memories of us taking over the dancefloor on the ferry on the last night, then sleeping under one of the stairwells before a 6:00am wake up call on arrival back at Harwich. 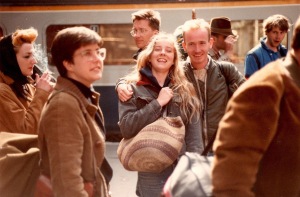 I need some sleep

There we all are looking so young and happy, self assured. ‘Warriors’ ready to do battle in the nation’s schools for the cause of the visual arts. I find  it impossible to look at them and not feel a pang of yearning to be one’s former self in a life that was altogether more simple and carefree.

And the craic was good.

2 thoughts on “The Craic”