It is a matter of great regret that I never said a proper ‘Thank You’ to Peter Hill.

It was he, bless his large, round glasses who was responsible for the singlemost brilliant piece of teaching of my whole school career.
A bit of background: This happened in Rochdale, Lancashire.

Ah! Rochdale.If you’ve never been there, it’s a bit like … how can I describe it? … Imagine the Cotswolds and an artist’s watercolour pallette, full of greens in all their subtleties, an embarrassment of hues and tones: fresh, fragrant and soothing. Alongside it, the artist’s page and a peaceful, landscape, lovingly depicted but which is steadily succumbing to the leaking black which is seeping into it, courtesy of the artist’s son. Who, fancying a crack at a bit of painting of his own is happily grinding the brush into the disintegrating picture. He then paints his own fingers, the lamp black mixing nicely with the remnants of a peanut butter sandwich, which then also becomes incorporated into the pastoral scene… That’s what Rochdale is like.

Or at least it was in the ‘70s when I lived there and when Peter Hill, teacher and actor, cut a dash (as still does I am lead to believe) impeccably dressed as always, through the cobblestoned streets of nearby Whitworth.

I knew a bit about Peter Hill before I went to St. Wilfred’s Catholic Middle School where he taught. There were tales that went around about this mad English teacher who wildly over-pronounced certain vowels and consonants and had a ready willingness to threaten and use corporal punishment. My Dad (also a teacher, but not at the same school) had a few stories about him too, but advised me to tread with caution. He thought Mr. Hill an experienced and wily campaigner who could be a hard taskmaster and yet inspired great loyalty.

‘Trilly’ as he was affectionately known (Mr. Hill – Mister Hill – Mister ‘ill – Mistrill – Trilly: See?) was a regular cast member of the Whitworth Amateur and Musical Dramatic Society and a brilliant comic actor (something which he brought into his teaching incidentally) I still have very clear memories of him singing “I am the very model of a modern major general” and, it may have been the same production, an occasion when his false moustache and beard began to slip. With a series of matchless ad-libs he used it to great comic effect.

I adored him though, of course I didn’t tell a soul in school, particularly once I had reached St. Wilfred’s myself, and where, during my first year, for no apparent reason (I think I just got off on the ‘wrong foot’ with the place) I was a complete arse. He taught me Latin that year, but I just messed about. I didn’t give him a chance. I came bottom in the exam.

The following year, he taught me English. I was in one of his lessons, doodling away, as I often did, on the inside cover of my exercise book at a cartoon figure. I didn’t realise as I struggled with the hands of this wretched creature I was drawing that he was standing right behind me: ‘So THIS is what we do in our English lessons is it?’ He made me come out to the front. I was mortified. Ashen – faced, which you couldn’t see because I was blushing so much, I watched, eyes prickling with the hot tears welling up, but which I wouldn’t allow to fall, as he tore a page from my book, wrote something on it, folded it in half, and told me to go with it to the Library. I assumed I’d be met there by one of the senior staff to be given a serious punishment…I mean…getting sent out of a lesson.

‘Can I help you?’ The Librarian was a nun with a profile like an eagle. I dithered and looked around

‘Yes?…’ She was impatient. I thrust the piece of paper at her. She read it then told me to sit down.

After a few minutes, she returned with a book, set it on the table before me, opened it and laid the note alongside. This is what I saw… 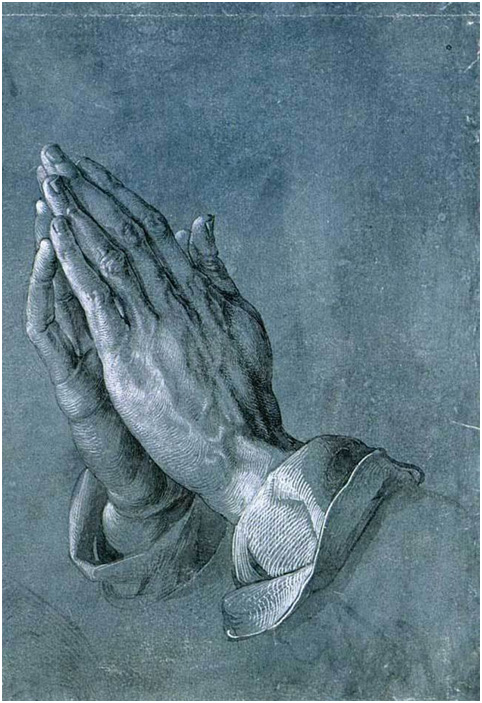 Underneath his written instruction to the Librarian it said:

“If you are going to draw hands in my lesson, you might at least get them right. Stay here and draw these until you know them back to front. Don’t move till I come to collect you.”

I never did get them right. But I’ve had a blast trying. So Peter, please accept my belated apologies.

Some four years after this was written I got a message which said that a relative of Mr Hill had stumbled across ‘Sitting Comfortably’ and had shown him this piece.

He was very keen to contact me and so I passed on my phone number. Sure enough about a week later I got a call one saturday morning. It was Peter Hill. We had a lovely conversation in which we remembered old times.

So I did get to thank him after all.