Now, here’s a tricky one for you. What is the connection between the Troodos Mountains in Cyprus, The Rileys, a notorious Islington-based criminal family probably best known for their Finsbury Square ‘shoot out’ with rival gang the Adams, and a small parade of shops behind St. Pancras parish church, designed by Thomas Cubitt and built in 1822?

Don’t worry if you’re struggling. There’s probably less than half a dozen people alive on this planet who know the answer; which is of course, Hangovers. Not the physical phenomenon that we all know and love, result of bashing the grape more than somewhat and characterised by headache, dehydration, upset stomach, double vision, death (or close to) depending on how many extra one has attemped to tie on. In fact at one time in my life I am sorry to say, what had become my ‘default setting’ such that occasionally; maybe on a Tuesday or Wednesday I would wake up in my bed and not some wretched, deserted London Transport terminal like Cockfosters, Upminster, Dagenham, Barnet Church etc. and stumble about, blinking in the sunshine, unaccustomed to the levelness of the floor and the agreeable volume at which I found everything. Fit, in fact as a fiddle. Which brings me back to Hangovers.

The next time you are walking around Bloomsbury, which I realise for some of you for reasons of geography, is going to be less likely than it is for others, do yourself a favour. Head north through Tavistock Square, pass the British Medical Association, then between The New Ambassadors and the County Hotel, Stick your nose into Woburn Walk. As if you’ve stepped into a timewarp you are transported from the noise, grime and traffic on Upper Woburn Place to the most wonderful parade of Georgian shops. 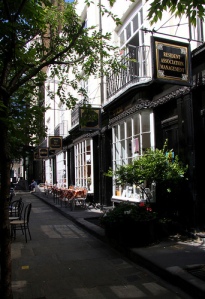 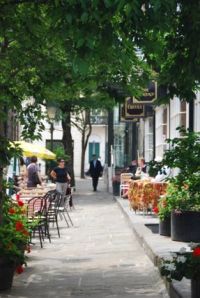 This hidden gem was the brainchild of architect Thomas Cubitt, also resposible for, among other things, the East front of Buckingham Palace and was built as London’s first pedestrianised street. The houses themselves are three storeys with stucco fronts , while the shop facades were designed with great skill (it says here) The window stood in the centre, flanked by doorways, each of which were of four panels with rectangular fanlight above.  Each window was divided by very delicate glazing bars into twenty-four panes, four panes high, and curved at each side. Between each pair of doors was a wrought-iron scraper and the rainwater downpipes, with moulded heads, were neatly arranged in alternate recesses between the houses. Number 5 was occupied from 1895-1919 by William Butler Yeats. While from 1982 -1987 it was occupied along with number 3, b 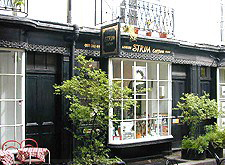 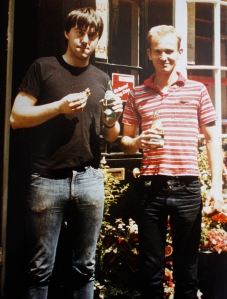 Aky and self outside Hangovers, summer 1984 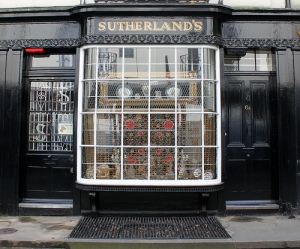 So there’s the first link. The others I’ll come to presently.

There are so many Hangovers stories. They criss-cross, overlap and are so tightly packed that it is almost impossible to tease them out into one single narrative. So they have been left to mature these last few years and what I am going to attempt to do for you is to slice off some of the tasty titbits such as Stage Door Martin and the Waterloo Bridge incident, The SAS Captain, and The Flower Seller, amongst others.

But all in good time.