I thought you might like to hear of my night out with George in the West End’s exclusive ‘Wag’ nightclub.

‘Playtime’ on a typical week around this period consisted of:

Monday and Thursday – the last hour in the Priory Tavern, Bow once I’d finished my marking.

Tuesday and Wednesday – 5 – A – Side league, Eastway Sports Centre and bar for post match analysis, Stratford (Now the site of the 2012 Olympic Stadium)

Friday – Skinful. East or West End. Long walk or expensive cab ride back from whichever London Underground/Transport terminal I happened to awake at.

Saturday – The Wag.  (Then after see Friday)

It was Simon, dear Simon who first got me in the Wag.

By rights, I should have hated the place, it seemingly embodied everything I detest  It was exclusive. If you didn’t look right, you didn’t get in: no matter how much money you waved in the face of bouncer, Winston. It was small and cramped, even after they extended it. The beer was shite and ludicrously expensive, BUT the music!. And I have to say, the people made it a top night out.The Wag played ‘grown up’ Dance Music, Funk, Soul and R ‘n’ B. And I loved it! I remember one night of solid James Brown and James Brown mixes. OMG! I thought I’d died and gone to heaven.

Often our itinerary was The Blue Posts Berwick St. Soho, Intrepid Fox, Jazz and Latin club Frith Street. Oh! and of course there was always someone to meet at the Spice of Life. 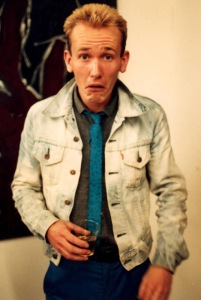 And so it came to pass that on one of these magical evenings, I found myself standing at the bar in the Wag. Minding my own business, I felt someone’s elbow graze mine as I idly scanned the bar looking for free staff, letting my mind and body immerse themselves in the music. I turned with a non-committal look, the owner of the elbows smiled.I smiled back, he used the opportunity to get the attention of the barmaid and get served. Bastard! It was George Michael.

As soon as he’d got his drinks, he made a beeline for the VIP area and motioned me to follow. I spent a blinding night in his company (and later that of his friends, which included Andrew Ridgely, Pepsi and Shirley among others) swapping the names of favourite singers and bands. We danced till the first morning light. Leaving the club, bleary eyed, I hitched a lift on the back of a milk float to Baker Street, at which point I jumped off and caught the first train back to Bow.

Actually that last bit’s a load of old bollocks. He smiled. I smiled back, he used the opportunity to get the attention of the barmaid and get served then fucked off to the VIP area while I waited another half an hour to get served. BUT the music! … It was a top night out.